On Sunday 10th June 2018 a group of Corby women and girls processed a banner created with Made With Many (formerly Made In Corby) in a mass participation artwork in London to celebrate 100 years of votes for women.

In 1918, the Representation of the People Act gave the first British women the right to vote and stand for public office. One hundred years on, women and girls across the UK will mark this historic moment as part of a living portrait of women in the 21st century in Belfast, Cardiff, Edinburgh and London with women wearing either green, white or violet, the colours of the suffragette movement. This vast artwork is based on an original idea by creative director Darrell Vydelingum, produced by Artichoke and commissioned by 14-18 NOW, the UK’s arts programme for the First World War centenary.

We were one of 100 organisations invited from all over the country who took part in PROCESSIONS, in which female artists were paired with groups of women and girls to help share their voices through text and textiles. In Corby, we hosted an 8-week series of workshops with artists The Eloquent Fold for local women and girls, mothers and daughters amongst them, to try their hand at creating a unique textile banner to process along the route in London.

Based at Swan Gardens, the group designed and made their own traditional textile banner, mirroring the women who came together on the streets a hundred years ago to make their voices visible. The main slogan “women together will change the world” was one that the group agreed upon after careful thought and consideration, which was emblazoned amongst a sea of violets – a symbol of the suffragette movement. The banner also features a raven, the emblem of Corby and the Suffragette motto ‘Deeds Not Words’, which is also the motto of the Corby Council Coat of Arms, dubbed in 1959. Individual rosettes were also made to wear at the procession, featuring each participant’s own words in English, German and Polish, reflecting the diversity of the group.

After 8 weeks of sewing and creating a banner, the group headed to the capital for a very exciting day of parading through the busy streets of London for PROCESSIONS – it is estimated that around 30,000 people were in attendance in London that day. Thank you to all of those women who processed the Corby banner in London and became a part of history with Artichoke and 14-18 NOW. Also, thank you to the Corby Votes & Voices group who sang original Suffragette songs throughout the day.

“It is a privilege to be a part of this historic event celebrating 100 years of women’s right to vote. I would like to thank the amazing group of Corby women who have been a part of the project; not only for their creativity in producing a powerful and beautiful banner for PROCESSIONS, but also for their strength and compassion when sharing and discussing our own experiences of what is means to be woman in 2018. Women of Corby – you’ve done us proud.”

Women Making History at the London Scottish House in Westminster
2nd June – 11th July 2021
A new exhibition of more than 100 extraordinary banners made for Processions. Explore the multimedia exhibition guide on the Bloomberg Connects app – just download and click on the project organisers, ‘Artichoke’. You can also see some of the exhibition in the film below with our banner making an appearance at 2’23”.

Google Arts & Culture
From October 2020 our Processions banner has been featured in Artichoke’s Google Arts and Culture page about Processions 2018 – it has been photographed with an ultra-high resolution camera, so you can zoom into the image and explore every stitch in exquisite detail. 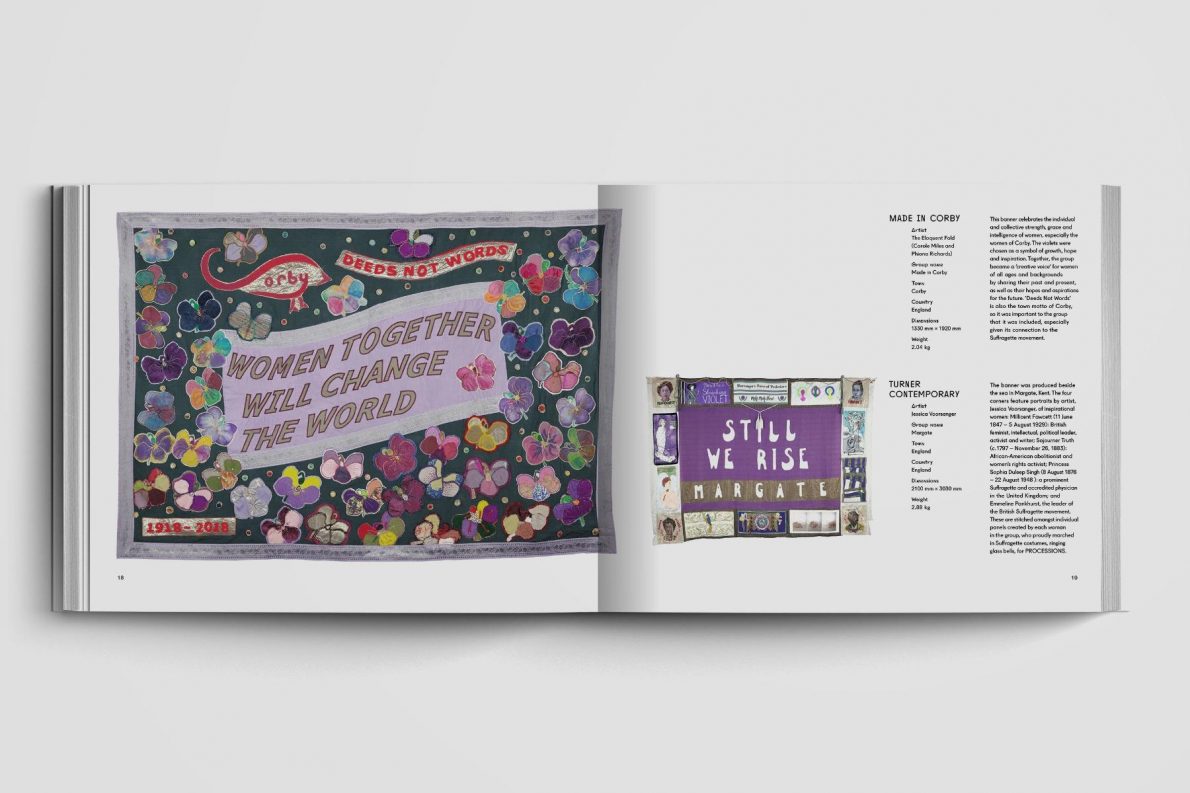 Celebrating Processions: Exhibition of Textile Banners
17th – 22nd September 2018
The Herbert Arts Gallery and Museum, Coventry
This exhibition included a selection of Processions banners made in the Midlands as part of the Festival of Imagineers.

PROCESSIONS was commissioned by 14-18 NOW and produced by Artichoke. With support from the National Lottery through Arts Council England and the Heritage Lottery Fund, and from the Department for Digital, Culture, Media and Sport.

For more information on the national project visit www.processions.co.uk